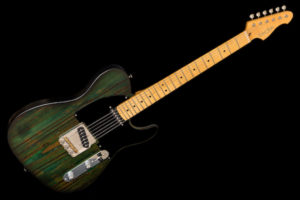 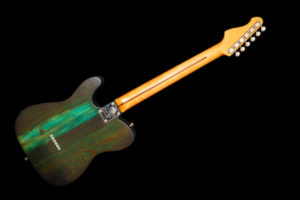 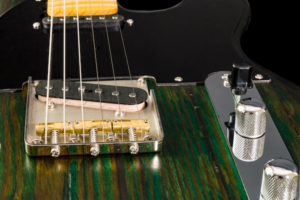 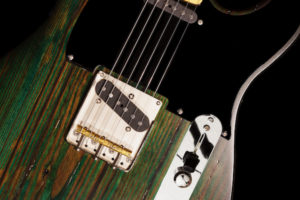 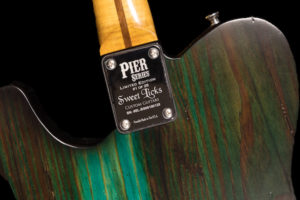 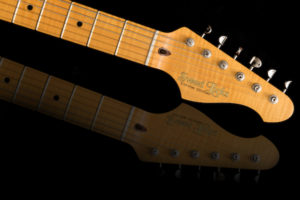 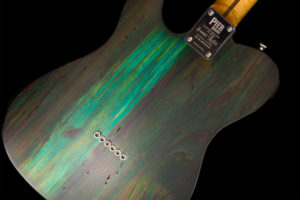 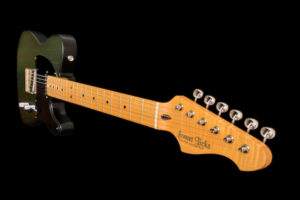 I was walking along the beach one morning in my home town of Pompano Beach, Florida struggling to come up with an idea for a new series of guitars. It was while I was making my detour to avoid a construction site for the pier that I realized my next series was literally right in front of me – The Pompano Beach Fishing Pier.

The old wooden pier was being razed to create a new pier. The Pompano Beach pier was starting to show her age after 57 years of hot Florida sun, many weather storms, and even 3 hurricanes – Katrina, Wilma and Sandy. It was Sandy that damaged the restaurant at the end of the pier, and caused the end of the pier to be closed due to safety concerns. Time for a new pier.

I peeked through the fencing and saw large sections of the pier that were cut up and stacked in the yard by a temporary construction office. I spoke with Chris, the Foreman of the redevelopment project, who told me I could have whatever wood I wanted, as he was going to have to haul it away.

I soon had my saw out there, cutting pieces that were long enough to make the guitar body blanks out of. It was tough going, not just because of the sweltering heat and humidity, but because a lot of the boards had huge bolts in them that were spaced too close together for me to use. Also, a lot of the wood had surrendered too much to time and the elements. That “time and elements” look was exactly what I wanted though, to show the “craggly” grain.

When we put the boards together to make the body blocks, there was still a lot of sand coming out of the wood that must have been there for decades! I tried to keep as much of the holes and crevices as possible to show the age and relief, without getting a splinter when you played the guitar!

NOTE: Because of the age and wear of the original pier wood, there is extreme variations in the grain look and feel. Please let us know what level of “roughness” you prefer.

We finish these guitars in a satin green/blue transparent stain, with a black burst around the edges.

This guitar is #1 of an extremely limited series of just 3 guitars. Only 2 will be for sale. (The third will be kept by us.) Get this amazingly rare and unique guitar now, and save $1,000.